9/23/2013: Mixing It Up – Artist Talk and Workshop with Alison De La Cruz
Mixing It Up is an artist talk and performance poetry workshop with Alison De La Cruz. Alison is a multi-disciplinary, community-based theater artist, producer, and arts educator. She will share her solo performance work and poetry and then work with students to explore their own stories around the mixed race experience. 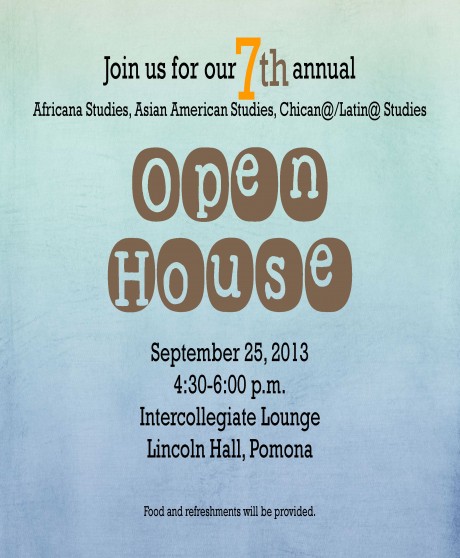 11/3/2013: Diwali
Diwali is one of India’s most wide celebrated Hindu festivals. Known as the “festival of lights,” Diwali provides entertainment including music, traditional dance performances, an Indian dinner and prayer.

11/15/2013: Spring 2014 IDAAS Course Info Session
We are offering new courses in spring 2014: ASAM 111: Pacific Islanders and Education, ASAM 130: Science, Technology, Asian America, ENGL 054: Asian/American Literature since 2000. Come by and learn about these and other IDAAS courses. Have a chat with the professors.

11/20/2013: Queerness after College Panel
This panel discussion focuses on experiences of queerness after college. We will explore how our panelists’ involvement with queer spaces changed post-graduation, how they navigated coming out in the workplace, how their relationships with their families developed, and what their queer support networks look like now.

11/22/2013: Mixed Hollywood
Guest speaker Ren Hanami will address the topic of being mixed race in Hollywood.

12/9/2013: Dispatches from Angry Asian America
Phil Yu is the author of the award-winning blog, “Angry Asian Man.” He started the blog in 2001 as a place to express his opinions, and 12 years later, the blog has grown into a media resource for Asian American activism and Asian Americans’ struggle with acceptance in the United States. His talk will focus on how Phil started his blog and the issues that it focuses on. He will also discuss specific issues and incidents that he has covered and that affect the Asian American community in the age of online activism.

12/10/2013: Hari Kondabalu: Stand-Up Comedian
Hari Kondabalu is an Indian American stand-up comedian and writer. His work is politically conscious, addressing issues of race and nationality in an accessible way for audiences. Students and members of the Claremont Colleges community will get the chance to hear from a critically conscious comic, who has made significant contributions to stand-up and the API community.

2/2/2014: Remember, Rebuild and Sustain: “Walang Iwanan” – A Haiyan (Yolanda) Typhoon Benefit Gala Event
Gala benefit to help those affected by the Philippines typhoon. Events include a mainstage benefit concert, preconcert “Musicking that Matters” benefit programs, and a workshop/teach-in about Filipino/a history and culture, and the aftermath of the Haiyan (Yolanda) typhoon and ensuing earthquake.

2/6/2014: Decolonizing Education Through Native American and Indigenous Studies
At the Claremont Colleges, there are enough courses related to Native American and Indigenous issues to make up a Major and yet we have never had a Native American Studies Department nor have our students heard of a substantial push for one in recent years. The fact that there are enough classes to make a major yet there have been no movement to create a department by the administration raises questions about who Professors are accountable to when they create their syllabi.

2/21/2014: Documentary Film Screening of a Korean Adoptee Musician
akaDAN is a documentary series that follows Korean American Adoptee musician, Dan Matthews, as he reunites with his biological family including an identical twin brother he never knew existed.

3/6/2014: A Nice Indian Boy
A Nice Indian Boy is a comedy about love and marriage. This is a unique opportunity for students to visit a cultural institution in Los Angeles and watch an Asian American play. Following the play, there will be a Q&A with the cast and crew.

3/7/2014: Holi
Holi is the festival of colour and is celebrated in India as the end of the harvest season.

3/12/2014: Estuh Eats: Imagine Korean Food Differently
This event is based on Esther Ha’s thesis project. It will be a cooking and food demonstration about Korean cuisine. With two traditional Korean dishes alongside contemporary Korean American interpretation of them, she will teach attendees how to make her original dishes as well as explain the connection to the traditional dish.

3/13/2014: Gwen D’Arcangelis: Technoscientific Discourses of Global U.S. Empire
Dr. Gwen D’Arcangelis will discuss the processes of racialization and Othering promoted by the U.S. news media during the SARS incident, creating new biogeographies of hygiene. She will examine how the expert discourses of epidemiology and biosecurity draw on, yet render invisible, the older rhetorics of racialization and Orientalism while promising to forge a secure global order for transnational consumption.

3/27/2014: At the Laundromat Screening
At the Laundromat is an award winning film by Vanessa Yee that exists to challenge the taboo of talking. It encourages viewers to air their dirty laundry – your past, your emotions, your fears, and your questions – in a safe space. The documentary features young Asian Americans breaking the silence that takes hold of their lives and their families.

3/31/2014: Refugee Nation: Theater Workshop
Refugee Nation: A Workshop on the Power of Storytelling will explore ways that Refugee Nation addresses the struggles faced by refugees and their children. Also included is a field trip to Khmer Arts Academy Studio where students will be able to see the entire show of Refugee Nation and also have the chance to engage with the local community based organizations.

4/1/2014: Prospective IDAAS Major/Minor Dinner
This event is to invite other students into pursuing a major or minor in Asian American Studies. Current IDAAS majors and minors will be present to answer questions and share their own experiences as majors and minors.

4/4/2014: Oldenborg Luncheon Colloquium: Robert Ku
Robert Ku is a leading specialist on Asian American food and the coeditor of a new anthology, “Eating Asian America: A Food Studies Reader,” His lecture is entitled “MSG and the Myth of the Chinese Restaurant Syndrome.”

4/15/2014: IDAAS Fall 2014 course info session
We are offering new/revised courses in fall 2014: ASAM 115: Participatory Action Research, ASAM 135: Race, Empire, Filipina/o America, ASAM 171: Visual Culture at the Margins. Come by and learn about IDAAS courses for fall 2014. Have a chat with the professors.

4/19/2014: Jason Chu Speaks
Jason Chu will talk about his experiences as an Asian American making statements through artistic performance (spoken word, rapping, hip hop). He writes about the struggle between fear and joy and has specific works about anti-self hem, hope and healing, and faith.

4/26/2014: SKIM
SKIM – rapper, songwriter, and activist – weaves together stories of life, movement and love with rap lyrics and singing. Through the mixing of hip hop, spoken word and Korean folk music, SKIM is able to soulfully communicate her experience as a queer person of color.

5/7/2014: Asian American Studies Senior Thesis/Project Presentations
In coordination with the AARC at Pomona, CAPAS at Pitzer, and SCORE at Scripps, we will award the Peter Kiang Thesis Prize and Merle Woo Project Prize and announce the Margo Okazawa-Rey Summer Fellowship recipients.

5/16/2014: 5C AAPI Graduation
Sponsored by the Asian American Advisory Board. IDAAS faculty participate in full regalia to pass out certificates and stoles.